EPF Balance using UAN Number/ PF Number, Know your Pension Status, PF Claim Status, EPFO Balance Check at www.epfindia.gov.in, Forgot UAN Number/ Reset Your UAN Number, Member Passbook
For checking EPF Balance or the provident balance by utilizing UAN number/ PF number, a simple steps to be applied. All those people who subscribe to the Employees Provident Fund are also aware of Universal account number that is given to them by the authorities or companies where they work. Various employees have got their UAN number and this can be utilized for checking out the EPF balance. in case there is no UAN number allotted to a user then EPF balance or Provident Fund Balance cannot be checked. For this, the person has to check for this number with the employer as this number is already available with them or it is there in the employee’s salary slip. The allotment of this number is very quick by the authorities yet it was very slow in the past.

How to activate Universal Account Number (UAN) Online at epfindia.gov.in

1. Visiting the EPFO website – the user has to link the EPFO account with the universal account number and the member passbook can be seen at www.epfindia.gov.in

This Passbook shows the summarized balance as well as the details of the amounts credited to the account.
2. SMS: By linking of the UAN number with the EPFO user can get latest updates via SMS and PF balance can also be known by sending a message stating EPFOHO UAN ENG to 7738299899. In this message ENG stands for English as it is the first three alphabets of the chosen language. Even if a person wants to get the message in any other language then the first three alphabets of that language can replace ENG. For example if the person wants the message to be delivered in Hindi than the message to be sent to the same number will be EPFOHO UAN HIN. However the EPFO can just send the information of the members which is available with it so it is important that an employee ensure that his UAN is linked with the bank account, PAN number for Aadhar number otherwise the employer will have to do that.
3. By giving a missed call: a missed call can be given to a designated number which is 01122901406 from the registered mobile number so that the details can be acquired. Again this needs that the UAN number is linked with the PAN and Aadhaar.
4. By utilizing app: In Google Play Store the user can download ‘M-Sewa’ and then the options of balance / passport has to be chosen followed by the option of member. It will ask for UAN number and the registered mobile number to fetch the details. 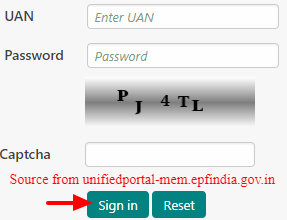 Check Your EPF Balance by using UAN Number at unifiedportal-mem.epfindia.gov.in

By use of UAN number, the EPF balance can be checked easily by the given process:

If the employee’s Basic salary is higher than Rs 6,500, the predetermined upper limit for obligatory PF Gross, his PF part can be computed as 12% of the Basic salary. Alternatively, one can compute PF as 12% of Rs 6,500 rather than Rs 9,000. The Employees’ Provident Fund (EPF) interest is computed on the contributions made by the worker in addition to the employer. The employee and the employer contribute the sum equal to 12%/ 10% (involving EPS & EDLI) of his/her basic pay and the dearness allowance (DA).

The PF balance check can be performed by different moods. The PF is a social security arrangement for the workers in which the workers who earn above 15000 each month contribute a fraction of their salary into the PF savings and and equivalent sound is also contributed by the employer. The employees who have more than 20 workers have to get PF registration and they also assign UAN for contributing workers. UAN registration is important for checking the amount of provident fund for the worker. This number is assigned by the employer for the employee and is also known as the unified account number. In case of person is already working with some other organisation and changes to a new one then the previous employers UAN number can also be utilized while joining the new company. The current employer verifies the details and then the previous UAN number is transferred to the new employment.

The balance of PF can also be checked on the employee provident fund portal. for this also the UAN number is require. One can visit https://passbook.epfindia.gov.in/MemberPassBook/Login.jsp

For this, the person has to give UAN and password along with completion of capture find the screenshots below show how it can be done. Once the person is locked and then the option for giving passport has to be chosen and after the displaying of the PF balance, the same can be downloaded from the unified portal. 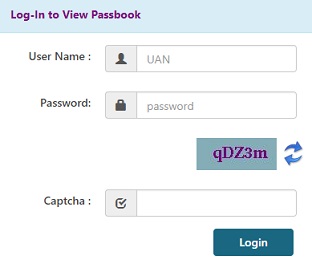 Follow the steps and open the member passbook easily:

How to Withdrawal PF Amount/ Check Your PF Balance Online

One can take out the full EPF balance on coming to the age of 58 years or in case the beneficiary is unemployed for a constant time of two months as minimum. The EPFO has also given a provision of conditional withdrawal in which the balance up to 90% off the full amount can be taken out in case of some situations given out by the EPFO. Moreover, these conditions also are not applicable in case the person has attained the age of 57 years. So as a person attains 57 years of age, then 90% of the amount of EPF Corpus can be withdrawn. with respect to the tax implications, EPF withdrawal have zero taxation in case the withdrawal is the following the five years of constant employment. In case the five years are not complete then the amount gets accumulated to the taxable income and tax has to be paid depending on the marginal taxation rate.

PF balance can be checked without difficulty by giving a missed call to 011-22901406 from the listed mobile number. Simply the number attached with the UAN can be utilized for the missed call. Similarly, the SMS facility can be used for checking the balance by to sending a message 7738299899 from registered mobile number. The message should be “EPFOHO UAN ”. For English the language code is ENG, for Telugu it is TEL and similarly for all other Indian languages, the first three letters of the language’s name can be applied.

In May, 2018 retirement fund body asked the offices to keep the percentage of interest for PF as 8.55% for the year 2017-18. It is the lowest interest rate after the financial year 2012-13. The labour ministry has also stated that the approval has been given by the central government for this interest for the PF accounts. the EPFO office issued a mandate for the same 2 over 120 field officers. The Finance ministry of India has stated that 8.55% as rate of interest would be given for previous year however the same could not be applied due to the model code of conduct for Karnataka polls. The Central Board of trustees for EPFO was headed by labour minister for 6 in this stated rate of interest at 8.55 % and this amount was approved and declared after the meeting held on 21st February 2018. This is a 5 year low rate of interest.

EPFO is one of the biggest social security organisation of the world because it has maximum number of clients and it also holds a huge amount of financial transactions carried out. Presently there are more than 15 crore accounts which are held by the members of EPFO. This body came up with the promulgation of the Employees Provident Fund Ordinance on 15th November 1951. in the 1952 there was an act passed which replace the ordinance by the Employees Provident Fund act. For this body there is Central Board of trustees which managers are pension scheme, contributory provident fund and insurance arrangement for the employees who are part of the employment sector of India. EPFO consists of officers at 122 places all over the nation and there is properly arrange training given to officers and staff members of this organisation. The administration is handled by Ministry of Labour and the employment Government of India. There are different schemes which are also set up by this organisation like the pension scheme 1995 EPF scheme 1952 as well as the employees Insurance Scheme of 1976.

The provident fund is a retirement fund scheme given out to the salaried people. The workers and employers have to make contribution to this scheme on a regular basis that is on monthly basis. Usually it is 12% of the basic salary of the worker and the same contribution has to be done by the employer. These benefits can be availed by the worker on getting retired. There is also an option for liquidating the amount while the worker is already employed and there are particular terms and conditions attached to it. An individual can claim the PF withdrawal online also by raising the request to the EPFO. For claiming the withdrawal the person has to go to the portal of EPFO and choose option of ‘our services> for employees’. After this the user has to click on ‘Know your claim status’ along with entering the UN and captcha image. This where the claim status information can be achieved by selecting the PF office and PF account number along with the state of the PF office. The user is always aware of his particular details and once the submission is 10 then the claim status can be known. For the use of the claimant, the EPF also gives alerts through sms in case a mobile number has been registered with the account. Once the claim application is processed or received as well as on the transferring of funds into the claimants bank accounts, the SMS will be received by the claimant.